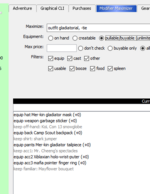 Staff member
You may want to consider using +current instead of and/or in addition to -tie, but that said, I don't think that will actually work today.

(This specific example is weird because there's no reason to run maximization when you just want to equip a specific outfit but not affect anything else.)

This is controlled by the hardcoded tiebreaker in MaximizerSpeculation.compareTo and cannot be overridden otherwise -- in particular, it's preferring items that drop items / meat.

It might make sense to inline these additional modifiers into the tiebreaker expression (in Evaluator.java), but that would require adding handling of "optional" boolean modifiers. We could also change "Drops Items" and "Drops Meat" to be numeric modifiers (which would be more flexible, although it could break some weird existing workflows).
H

Staff member
https://github.com/kolmafia/kolmafia/pull/427 as a workaround for now. I wouldn't object if we instead opted for one of the other approaches.
H

Staff member
I think this is tentatively fixed (via workaround) per r26078, but let me know if it isn't.

Thanks, however there still seems to be an issue in r26096. Current offhand is brimstone bludgeon btw. 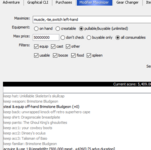 Staff member
I haven't bothered to try and reproduce them but I see a lot of cases where the maximizer tries to equip something that is already equipped in the other hand when there is only one available. I do tend to do just a simple maximization - just one thing to maximize.

I have 3 of the bludgeon, which makes it even weirder that it wants to unequip one in order to put it in the offhand. And I am just maximizing for one thing in the example posted?
H

Staff member
I think this is a separate bug, but I'm not sure what it is yet.

"steal" suggests it's trying to take it from the disembodied hand. Is it just a display issue, or does it actually remove your familiar equipment? What does Mafia think is the state of your equipment + inventory at the time? (the output of `equip; inv brimstone` should be sufficient)

I was wondering if it might have to do with it checking against the left-handed man, in which case the disembodied hand wouldn't need the bludgeon? But even so using a bludgeon wouldn't improve the score over the bunker...