This is the "home" thread for Philter. Report bugs, give hugs, and discuss features.
We recently renamed from "OCD-Cleanup" to "Philter". While you can continue to use Philter as-is, we recommend reinstalling Philter (please check our migration guide). For details, see the separate thread or the GitHub issue.

Philter is an inventory cleanup script. It is a fork of @Bale's OCD Inventory Control.
Philter lives in GitHub, under the wings of Loathing Associates Scripting Society.

Philter purges (i.e. "filters") junk in your inventory. Mallsell, autosell, pulverize, you name it. It's great for cleaning up items you accumulated during ascension, a dungeon run, or a day of farming.

To install Philter, enter the following into the KoLmafia gCLI:

So it's a copy of Bale's OCD? What's wrong with the old one?​

Nothing! You can continue to use OCD Inventory Control if you want.

However, Bale has not been around us for a while. OCD Inventory Control has been collecting subtle and dangerous bugs (example). Eventually, a KoL change made it unusable without a (pretty simple) fix. This motivated us to create a fork which became OCD-Cleanup.

I thought it was named "OCD-Cleanup"? Why rename it again? And why "Philter"?​

Yes, it was! After receiving multiple requests, we decided to move away from the old name which included ableist language. Check out user opinions at the rename thread. We eventually held a poll to choose the new name, "Philter".

Renaming the script will break my workflow!​

We're trying hard to make it as painless as possible for everyone involved. More updates will be posted here, with technical details available on the GitHub issues board.

What's with the "alpha" page?​

It's the new relay UI for Philter! I've been working on replacing the old UI for a while. Although it is still incomplete, I felt it was ready for a preview.

The "classic" Manager will stay around until we're confident that the new one is just as good, if not better. Expect updates within the next few weeks. Please report bugs and request features here (or on GitHub)!
Last edited: May 20, 2021
T

Just a question on the classic and new UI. What do they show. Do they just show the inventory, do they include hagnks, closet, clan stash? If the later of the 3 can you add a preference for what you want it to show?

Right now, both Managers show uncategorized items in your inventory, though we also display their quantities in the closet, DC, and Hagnk's--check out the "C", "S", and "D" columns in the item tables.

Clan stash is not included, which is probably a good thing since other people can add items to/take items from the clan stash "in the background", making the displayed values inaccurate. Same thing can be said for your inventory, but at least that is in your control.

Could you describe your problem in detail? Is it because you feel the UI is too cluttered? Or do you want to inspect your closet without taking items out into your inventory?

Many thanks for maintaining this script. How do I prevent it asking me to stop to categorise new items? The OCD version used to skip over this part and continue without complaining, so I must have altered something, but I can't remember what!

When we forked OCD Inventory Control we retained the behavior of asking once on each invocation. I can't recall there being a setting, so it's possible that you manually edited the ASH code to comment out the popup code.

No promises, but I'll see if I can add a setting that suppresses the popup.

philmasterplus said:
When we forked OCD Inventory Control we retained the behavior of asking once on each invocation. I can't recall there being a setting, so it's possible that you manually edited the ASH code to comment out the popup code.

No promises, but I'll see if I can add a setting that suppresses the popup.
Click to expand...

That would be great; in the meantime I'll just comment some bits out and see what happens. Thank you!
B

Tnanks for maintaining and updating. I've noticed that when trying to smith via Innabox, if the number of each item isn't the same, it aborts instead of making the max possible number.

Code:
And (unrelated) when using the new interface, I get this pop-up when I change black pixel to mall sale. 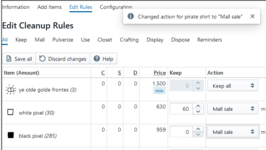 For the crafting thing, I believe there's a checkbox next to the Action field that controls how much Philter will make. I haven't looked at the code in a while so I might be wrong.

The popup is intentional. Currently, when you change the action for an item in a subtab, the item is immediately moved to another subtab without any visual feedback. If you misclick an action, you can lose track of where the item now is. The popup is a helpful reminder.

But it's a hack and I'm not happy with it. Do you feel showing a popup all the time is too annoying? I would appreciate suggestions on UI improvements.
B

philmasterplus said:
The popup is a helpful reminder.

But it's a hack and I'm not happy with it. Do you feel showing a popup all the time is too annoying?
Click to expand...

Sorry, I was unclear. I think the pop up is okay. But it was showing a different item (which wasn't even in my list): black pixel != pirate shirt, so I wasn't sure what was going on and went back to the classic view.

Ah, gotcha. I'll look into this.
B

Thanks for looking into the issue above.

I'm seeing the script override existing prices in my store when it cleans my inv and autosets prices. I would expect (and want) it to just add to the store inv without adjusting prices if the item is already in the store. It undoes a bit of manual work, otherwise.
You must log in or register to reply here.
Share:
Facebook Twitter Reddit Pinterest Tumblr WhatsApp Email Share Link
Top