Is the new property really VMF.GingerbreadCity?

I had a hard power related computer crash that trashed one character's settings file. It has been interesting recovering because VMF works best if it can buy from the mall, buy from coinmasters, etc. and if settings that try and override defaults actually use the same case. None of this is VMF's fault but at the moment I am hypersensitive to the difference between VMF.NightCap and VMF.Nightcap.

Tangentially because Veracity scripts and some zlib scripts as well have adopted the convention of only storing settings that change from the default, the ability to discover things using prefref or the settings text file is diminished. I'd love the ability to type "vprefref VMF" and have a prefref type display that included VMF preferences that were set to their default as well as ones I have changed. Not to hard to build with awk but...

(zarqon's implementation has a defaults file and his relay script prefrefplus displays a merge from the default and user settings file but his autobuilding of the defaults file sometimes gives interesting results when multiple characters are played).

I like not having excess preferences, and that was a design goal of vprops, but having documentation and the ability to see defaults was a discussion point when I introduced vprops, and he and others did their own script property management implementations.

The display of preferences is a convenience item. It became important (for example) when the character who needed preferences rebuilt ran VMF and ended up overdrunk. I knew there was a preference for that. vprefref would have been my preferred solution, in part because there is less visual clutter. prefref on a character who remained sober sufficed and there always was
"vi VeracityMeatFarm.ash" so this is more about the easiest way, IMO, to get the information rather than whether it is available, or not.

It does make me wonder about whether an ash script can obtain the contents of another script as a string.
M

I've found myself wishing for this feature on occasion; right before I resort to grep.

I am running a local mod but SVN only shows one line different. (static location SHRINE = $location[ Noob Cave ]; to allow voting monsters to be fought). The usual "nothing changed" disclaimers apply and will probably be found to be incorrect.

VMF.ItemFamiliar was never set for this character. Setting it to none from the gCLI doesn't change the behavior.

Could be a side effect of the forum change and zlib (unnecessarily, IMO) checking for updates but since VMF does not depend on zlib it would have to be a second order effect.

I also note that KoLmafia doesn't seem to know about all my familiars so perhaps something didn't get initialized properly. r20483. I did have some network hiccups while logging in.

P.S. And indeed that is the case - I logged back in, mafia knows about my familiars and VMF is running.

Not sure what is happening. I ran VMF and it failed getting Ode from a bot. SevenLances_com was probably online according to the GUI so I asked for 25 turns of Ode and got them. I then restarted VMF and it failed. See the screenshot which shows that there are at least some turns of Ode but VMF is not willing to proceed without getting more.

I would like VMF not to stop but I am certainly prepared to be educated as to why it should stop Is there a reason SevenLances_com is not checked as a buff source? Is there an option I have missed to drink even if enough turns of Ode are not available? Thank you. 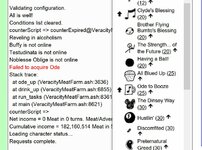 I tried to use the Ghost of Crimbo Commerce as the value for VMF.MeatFamiliar and that worked fine but that familiar can't equip anything. I couldn't find a way to tell VMF to leave the familiar non-equipment alone. Am I missing something?
B

You can set VMF.FamiliarEquipment to none.
K

The script won't run for me keeps stopping because this error
Unknown variable 'monster_set' (VeracityMeatFarm.ash, line 310)
do you know how to fix this? The error happen sometime ago for me and seem like updating mafia isn't fixing it right now i'm using mafia 20612.
Last edited: Jan 21, 2021
M

BurningBman said:
You can set VMF.FamiliarEquipment to none.
Click to expand...

That did the trick! Thank you. So I was missing something. I saw that option in the file and wasn't sure whether it would affect other, non-Tot, familiars but it didn't.
T

Heres a suggestion:
If you have Ezandora's bastille script run the command before maximizing for adventures so you have the draftsman gloves and the meat buff from the bastille