Maybe you were uploading? I was updating right before I posted, but ChIT was still b0rked...maybe the old version hadn't finished deleting, or the new one hadn't finished downloading? Looks fine now, though, was just coming to edit that in, in fact.

Good! Glad you got it sorted.

I believe the latest fix to deal with the birdwatching iotm broke older skills that have an apostrophe in their name. Trying to cast additional turns of a skill's effect with the arrows next to it results in

I changed this in chit.css

as for me the scroll bar kept showing up in the roof... would do a pull request if I was better versed in github

Lacey Jones said:
I changed this in chit.css
Click to expand...

Did you know that you can modify any css settings in chit with your own chit_custom.css file?

Is there something special I need to do to get PP to display with the latest update? Chit now displays coins but not PP.

Thank you for the speedy plumber update.

Magus_Prime said:
Is there something special I need to do to get PP to display with the latest update? Chit now displays coins but not PP.
Thank you for the speedy plumber update.
Click to expand...

It did not work for me either. I checked in an update that fixes the regex for Power Points.
The code actually had everything in place, just with a regex string that was not working. Let me know if my fix breaks this for anyone. I am not sure where the original came from.

Edit / Update: If you have "Use Slim HP/MP/Meat/Adv Display (only applies in non-compact character pane)" checked, the original regex works, if not, you need the other one... I will have to get more creative to make both work.

It's working now. Thank you!

/hardcore is telling me that this is due to the most recent ASH cleanups in mafia, but ever since 19889/19890, the HP and MP bars in the charpane are blue/blue/blue instead of their usual green/orange/red.

By /hardcore he means me.
It was fine on r19886 yesterday, seeing the same as Boes on r19891 today and haven't tried anything in between myself.

r660 should bring your colors back.

While we're here, could I make a request to stop this happening please? 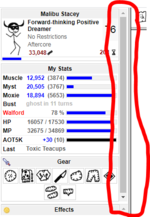 No matter how I resize that frame, the scrollbar (which can be moved a whole 1 pixel up or down) never gets removed.

I am looking at the chit sourceforce page and I see people are still actively committing to it, but I do not see a license.
Is there just not one or am I not looking properly?

A little late with the reply, but no, there is no license atm, and given that I'm not the original maintainer I'm not sure what the right move is as far as theoretically adding one...
S

As long as I have a familiar equipped on my shkspr account, ChIT displays "Last (none)" even though I've been running adv. The list of "Effects" also disappears with a familiar and reappears when I unequip any familiar. This happened while in HC and aftercore. Note: This only happens on shkspr and not on any other account. Granted, I have many more IotM on shkspr than on any other account.

I even created a new Mafia folder and only copied the .jar file to the new folder and launched it, loaded zlib and ChIT and it shows the same behavior. Also tried it on a separate computer, same stuff.

Please help if you can. If I need to post to a ChIT forum, I will, just don't know where that might be.

Staff member
Please repost this here and then delete this thread

Character Info Toolbox CHIT is a charpane relay override that allows you to customize the layout and content displayed in your character pane. It also adds some extra functionality, like the ability to quickly change your familiar equipment. And progress bars. Lots and lots of progress bars...
kolmafia.us

gausie said:
Please repost this here and then delete this thread

Character Info Toolbox CHIT is a charpane relay override that allows you to customize the layout and content displayed in your character pane. It also adds some extra functionality, like the ability to quickly change your familiar equipment. And progress bars. Lots and lots of progress bars...
kolmafia.us
Click to expand...

Moved and merged. For future references devs have moderator privs so can move posts and threads if needed.