Unfortunately the "max" term is too short to be included in searches, so I apologise in advance if this is already known and not a bug/an algorithm limitation/me not understanding the keyword's usage.

For instance, attempting to set "ml 5 max", will suggest backupcamera ml (+5), even though its real actual value is far above that, misreporting itself as +5, while also not recommending any of the lesser modifiers (items with actual +5 ml).

Further odd behaviour: going to a ml just above the backup camera's real monster level, recommends another +5 ml item, then weirdly adds up 33 + 5 = 34. 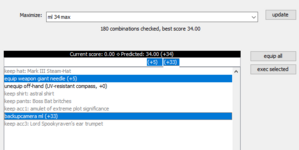 Expected behavior: in this scenario, the items that fit within the limits being picked first and not the camera if it would exceed the max value, as well as in general the modifiers reporting their actual value.

At first I considered it to be a bug with the backup camera, but this behavior seems to apply to all items/modifiers from very brief checking.
H

Staff member
The max operator is a bit weird, especially given that it behaves differently from min.

From the help link in the maximizer:

min - The weight specifies the minimum acceptable value for the preceding modifier. If the value is lower, the results will be flagged as a failure.

max - The weight specifies the largest useful value for the preceding modifier. Larger values will be ignored in the score calculation, allowing other specified modifiers to be boosted instead.
Click to expand...

Staff member
(It's weird that you don't have a help link in the maximizer, in your screenshots. Is something broken?)

I edited the images to what I perceived as relevant parts, hence the lack of some of the interface. Personally however I subconsciously didn't notice the "help" button, which seems apparent now that I looked for it (and explains the operators), thanks!

If that's it I assume it's just regular (if possibly somewhat unintuitive) behavior then?
H

Staff member
Yeah. This is intended behavior, although maybe a new keyword to handle this might make sense. I'll close as "not a bug", although if you want me to reopen as a feature request, I can do that too.